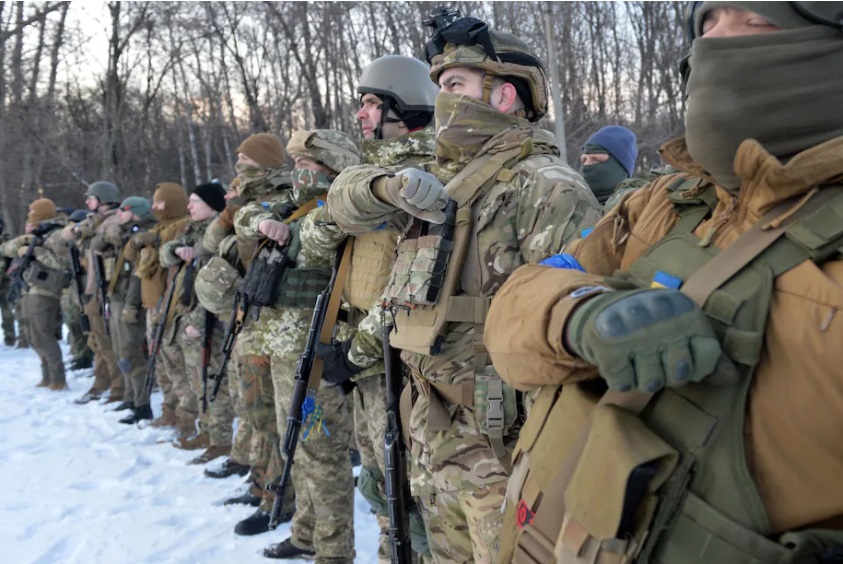 Not since ISIS have we seen such a flurry of recruitment activity.

“Hi can you please forward a message since two of us are trying to get a carshare from germany to ukraine going,” reads a Feb. 26 message forwarded to a popular neo-Nazi Web channel.

“We are 3 french, leaving Strasbourg tomorrow morning with our car,” another message answered. “There is place for 2 german fighters.”

These are the types of conversations that have flooded Western neo-Nazi and white-nationalist venues online every day since Vladimir Putin ordered the invasion of Ukraine: users organizing carpools, plotting how to cross the Poland-Ukraine border to join the fight against Russia. Their goal is not to defend Ukraine as we know it — a multiethnic, democratically minded society led by a Jewish president. Some neo-Nazis simply see this new war as a place to act out their violent fantasies. For others, though, the force pulling them toward the conflict is a shared vision for an ultranationalist ethno-state. They see Ukraine as a golden opportunity to pursue this goal and turn it into a model to export across the world.

The would-be militants have been recruited by groups like the Azov Battalion, a far-right nationalist Ukrainian paramilitary and political movement. Azov was absorbed into the Ukrainian national guard in 2014 and has been a basis for Putin’s false claim that Ukraine’s government is run by neo-Nazis. Though Azov remains a fringe movement in Ukraine, it is a larger-than-life brand among many extremists. It has openly welcomed Westerners into its ranks via white-supremacist sites. Azov stickers and patches have been seen around the globe: from a bookbag at a July 2020 neo-Nazi counterprotest in Tennessee to the motorcycle of an attempted mosque bomber in Italy.

To be clear, not all in the far right adore Azov, which some see as having ties to Israel or Jewish funders. But since Azov publicly invited foreign fighters into its ranks on Feb. 25, the organization’s official Telegram chat group has been packed with messages from people in the United States, Britain, Germany, France, Spain, the Netherlands, Sweden, Poland and other Western countries expressing interest in joining. Neo-Nazi chat groups and channels in various languages have echoed Azov’s calls. I haven’t noticed this level of movement-wide recruitment activity since the Islamic State declared its so-called caliphate in 2014 and sought sympathizers globally to join its fold.

We at SITE, an intelligence group tracking global extremists, have noticed a surge in online activity by white nationalists and neo-Nazis in conjunction with the war in Ukraine. Among the hundreds of individuals who have announced their intent to join Azov in recent weeks are several known neo-Nazis. For instance, “MD,” an American member of Azov’s recruitment chat group, has repeatedly tried to get fellow countrymen to join the battalion in Ukraine. “Are there any Americans looking to go? We could for a group to go over there,” he said. We discovered that MD is also a member of some of the most sadistic far-right extremist chats on Telegram, where he has proposed establishing a neo-Nazi militia in the United States.

“D,” another member of the chat, is a self-described military veteran in Britain who is active in dozens of neo-Nazi venues on Telegram. Like MD, he has sought to form his own band of countrymen. “Any UK bois, I’m in Uk and leaving hopefully in 1-2 weeks,” D wrote on Feb. 27.

D’s motivations seemed even more troubling than MD’s. He wrote, “Anyway when I get to Ukraine I’m going to kill extra Jews now whenever I see them.” Another post read in part, “I’m getting my gear together, hail Hitler, glory to Ukraine and let’s all kill some [expletive] Jews for Wotan!” (Wotan is a god from Norse mythology, which many far-right extremists appeal to in their rhetoric and aesthetics.) D later indicated that he had formed a “group from UK” to head to Ukraine.

“Polish guy living in America here, looking to help out in any way I’m able,” chat member “Z” posted on Feb. 25, later adding, “i’ve got a lot of gear i can bring around, from helmets to vests of all sorts.” Z is also an active member of many neo-Nazi chat groups, we discovered. The same Z wrote in another chat group: “I hate Ukraine.”

That’s because Western white supremacists and neo-Nazis, for the most part, do not support the current Ukrainian government — and not simply because of its ban on antisemitism, President Volodymyr Zelensky’s Jewish heritage or other specific matters. Ukraine is a developing democracy, which far-right extremists oppose as contrary to the fascist governments they want to see. As the administrator of a popular German and English neo-Nazi chat group wrote while urging members to join Azov, “I am not defending Ukraine, I am defending National Socialism.”

Furthermore, while some white nationalists have expressed admiration for Putin, many Western far-right extremists oppose Russia, which they conflate with the former Soviet Union and therefore consider communist. Yet this mobilization on Ukraine’s behalf is driven by more than just a mutual enemy: The mobilizers see the Russia-Ukraine war as a major opportunity to advance white nationalism via militancy. To them, Ukraine is a sandbox for fascist state-building, ripe for the kind of armed far-right power grab they long to see in their own countries.

For the most extreme among these neo-Nazis, the plan is even more sinister. They see Ukraine as a chance to further “accelerationist” agendas, which seek to speed up a civilization-wide collapse and then build fascist ethno-states from the ashes. This school of thought is demonstrated vividly by “Slovak,” whom we at SITE consider one of the most influential accelerationist neo-Nazi voices in the far right. On Feb. 25, Slovak announced that he was leaving an unknown country to fight in Ukraine. “This war is going to burn away the physical and moral weakness of our people, so that a strong nation may rise from the ashes,” he wrote. “Our job is to ensure that conditions remain terrible enough for long enough for this transformation to happen, and happen it must. Our future is at stake and we may not get another chance, certainly not one as good as this.”

Inspired, Slovak wrote that Ukraine could see its own decades-long fight, likening it to the resistance mounted in Afghanistan against NATO or the Russians. “The Afghans did it for over 40 years against both of these forces and now they’re in control of their destiny,” he wrote. “Ukraine will have to borrow a page from their book.”

Of course, none of these developments validate Putin’s claims that the war is about “denazifying” Ukraine. Forget about Zelensky’s Jewish background: It’s an ironic claim for Putin to make, since he gives safe haven to individuals such as Rinaldo Nazzaro, who was until recently the leader of the Base, a largely American cell-based neo-Nazi organization whose members have been linked to terrorist plots. Nazarro appears to have lived in Russia since at least 2018. Putin has also given haven to the Russian Imperialist Movement, which the State Department describes as giving “paramilitary-style training to white supremacists and neo-Nazis in Europe.” Putin gives these entities haven to help “aggravate societal fissures in the West,” a declassified U.S. intelligence report from last year suggested. Whatever sparse kernels of truth Putin is picking at regarding groups like Azov, it was he who invaded a sovereign country and created a new extremist breeding ground.

The issue at hand is not a matter of validating or invalidating narratives, though. The issue is security — for Ukraine and for the countries these extremists come from.

In many ways, the Ukraine situation reminds me of Syria in the early and middle years of the last decade. Just as the Syrian conflict served as a perfect breeding ground for groups like al-Qaeda and the Islamic State, similar conditions may be brewing in Ukraine for the far right. Syria became a plotting and training ground for terrorists to mount attacks in the West, such as the attacks in Paris in 2015 and in Brussels in 2016 attacks.

The extremists who successfully make it to Ukraine could return home with new weapons and combat experience under their belts — or stay in Ukraine, where they can further influence their countrymen online. Just because extremists are “somewhere else” does not make them any less dangerous to the countries they come from, as we’ve learned all too well. No matter where war takes place, it always amounts to opportunity for extremists.

Rita Katz is the executive director of the SITE Intelligence Group and a terrorism analyst. She is the author of the forthcoming book, “Saints and Soldiers: Inside Internet-Age Terrorism, From Syria to the Capitol Siege.”