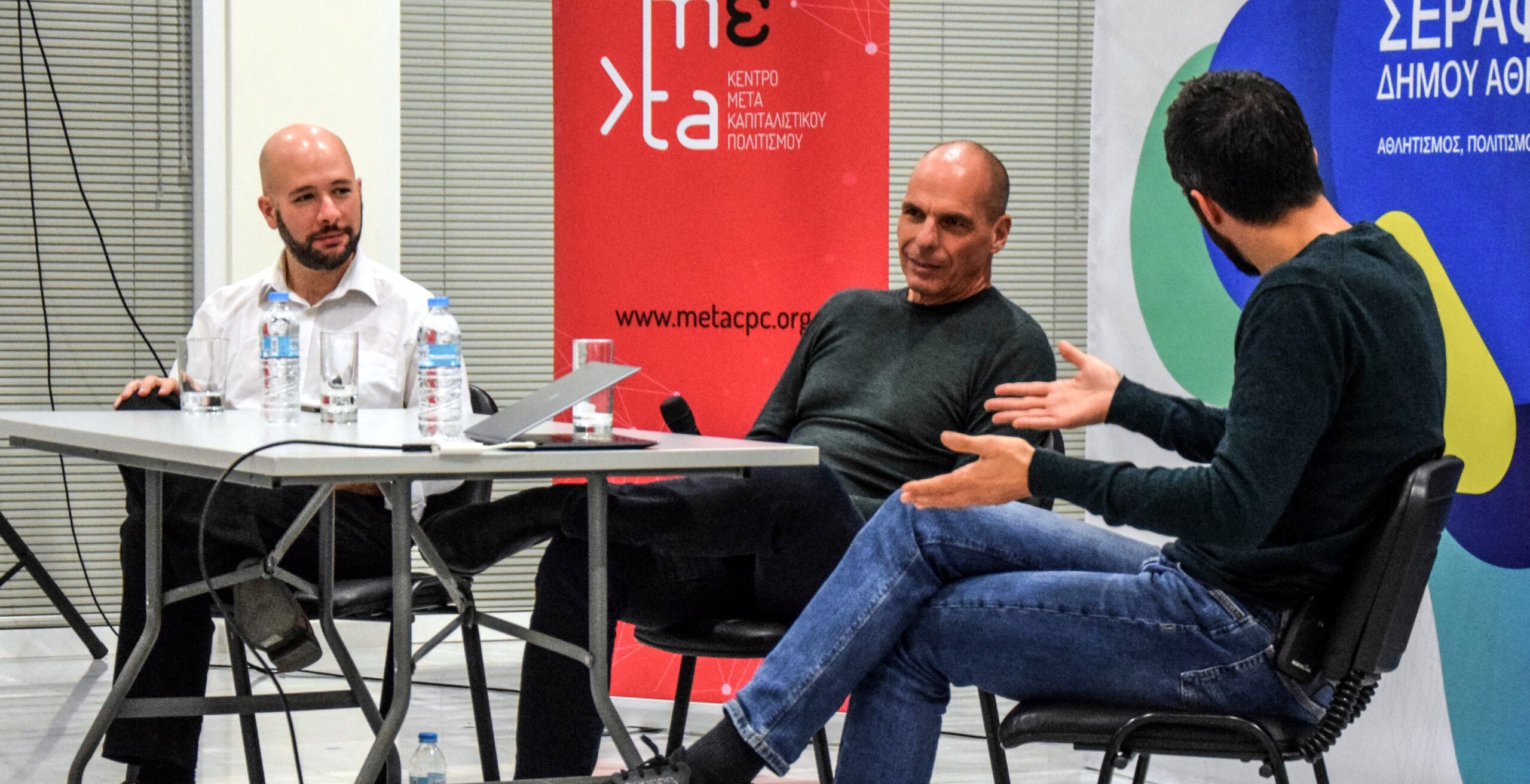 “Green capitalism”, as a response to the ecological crisis and the crisis of unequal distribution of wealth, is an illusion: technological innovation alone cannot solve problems that are by definition unsolvable in the present relations of power and property.

This is the conclusion to which Vassilis Kostakis  and  Yanis Varoufakis jointly arrived, as discussants in the event “What comes after capitalism? A discussion on P2P and the digital commons” organised on Monday in Serafeio (Athens) by the Centre for Postcapitalist Civilisation (mέta), continuing an effort to deepen the discussion on mapping alternatives to the present dystopian forms of social organisation.

In his presentation, Vassilis Kostakis, Professor of P2P Governance at TalTech and Faculty Associate at Harvard University‘s Berkman Klein Centerand a member of the P2P Lab cooperative, deconstructed the myth that competition and private initiative promote innovation and described the opposing vision of “cosmolocalism”, according to which the horizontal cooperation of producers on a peer-to-peer basis and the free movement of open technologies offers possibilities for strengthening local communities in dialogue with global realities; possibilities for the democratisation of production, “digital” and “physical” alike, as well as for countering climate change. At the same time, however, he pointed out the limits of these projects, to the extent that the business giants, at the moment the biggest funders of open-source research, are raising new “fences”.

As immediate objectives, however, he highlighted the need to fully utilise open source software in the public sector and to create spaces for the intersection of cooperative production and open technologies, in order to create a plurality of business and technological models; at a broader level, copyright laws need to be changed on a European level.

On his part, Yanis Varoufakis, professor at the University of Athens and secretary of MeRA25, reminded us of the role of state initiative and funding, as well as the cooperative logic in the creation of, e.g., the internet and wi-fi, up until the appropriation of new technologies by private “dinosaurs”, as has always been the case in the history of capitalism.

“We are not going,” he warned, “to simply experience a (r)evolution of these collaborative platforms that will push the capitalist system into the corner – quite the contrary. The only way for this kind of collaborative effort not to have the outcome of Robert Owen’s 19th century project, for example, is through the political action of political parties and movements, which, utilising the knowledge of the fact that these platforms can be more profitable than the capitalist ones, will clash relentlessly with the political, legal and economic aspect of the horrid predicament that private property is.” He further pointed out the importance of this debate for the realisation that technological progress is not identical to capitalism and does not presuppose it.

The particularly active participation of the audience in the Q&A showed the interest that the subject sparks and ultimately its politically crucial nature, encouraging mέta to revisit the issue soon, further focusing on the question of the “commons,” digital and otherwise.