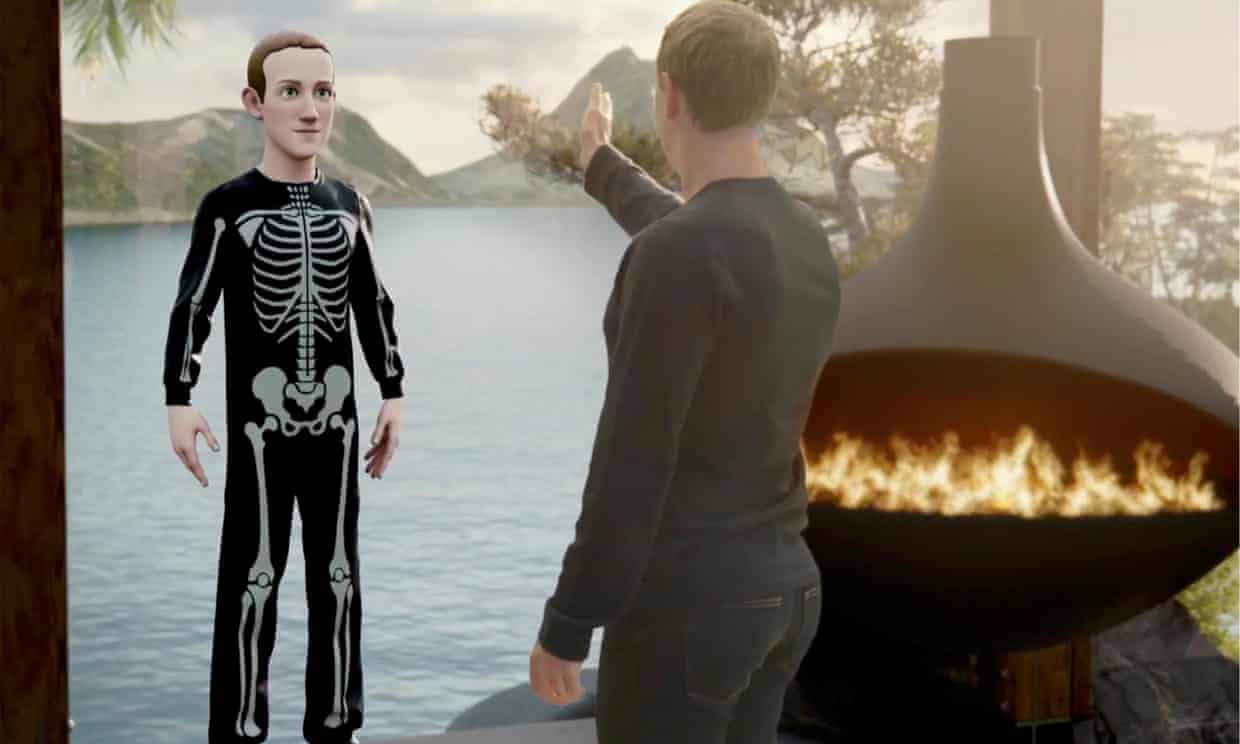 Once upon a time, a very long time ago – until Thursday 28 October 2021, to be precise – the term “metaverse” was known only to lexicographers and science fiction enthusiasts. And then, suddenly, it was everywhere. How come? Simply this: Mark Zuckerberg, the supreme leader of Facebook, pissed off by seeing nothing but bad news about his company in the media, announced that he was changing its name to Meta and would henceforth be devoting all his efforts – plus $10bn (£7bn) and thousands of engineers – to building a parallel universe called the metaverse.

And then, because the tech industry and the media that chronicle its doings are basically herds of mimetic sheep, the metaverse was suddenly the newest new thing. This was news to Neal Stephenson, the writer who actually invented the term in his 1992 novel, Snow Crash. “Since there seems to be growing confusion on this,” he tweeted, “I have nothing to do with anything that FB is up to involving the metaverse, other than the obvious fact that they’re using a term I coined in Snow Crash. There has been zero communication between me and FB & no biz relationship.”

In a 2017 interview with Vanity Fair, Stephenson modestly said of Snow Crash that he was “just making shit up”. If so, some shit. The book is not just a great read, but eerily prescient. It’s set in a US where the government has more or less disintegrated and where everything is run by corporations that function like principalities in medieval Europe. The CIA has merged with the Library of Congress to become the CIC, a for-profit outfit that knows everything (Palantir, anyone?)

The novel opens with an unforgettable car chase in which the main character, Hiro Protagonist, who works for the mafia’s pizza delivery conglomerate, races desperately to deliver a pizza on time (Deliveroo?). Failure to deliver within 30 minutes of an order being placed earns you a death sentence. So the chase is a life-and-death struggle as Hiro races his GPS-enabled electric car through the streets of Los Angeles before he runs out the clock and faces the anger of the mob. And this was written in the early 1990s.

But the really intriguing thing about the new obsession with metaverse(s) is that it seems to have missed the point that the future envisaged in Stephenson’s novel is a deeply, deeply dystopian one. His metaverse is a vision of how a virtual-reality-based internet, resembling a massively multiplayer online game, might evolve. Like many multiplayer games, it’s populated by user-controlled avatars, as well as system demons. And status in this virtual world is a function of two things: access to restricted environments such as the Black Sun, an exclusive metaverse club, and technical acumen, which is often demonstrated by the sophistication of one’s avatar.

The irony of this metaphor being solemnly valorised by the boss of a powerful tech corporation seems to be lost on the industry. The original video in which Zuckerberg shows himself in the metaverse defies parody. “Imagine,” he burbles, “you put on your glasses or headset and you’re instantly in your home space [sic]. There’s part of your physical home recreated virtually. It has things that are only possible virtually and it has an incredibly inspiring view of whatever you find most beautiful.” It goes on like this for 11 minutes. Do keep a sick bag handy in case you decide to have a look.

If it were a spoof, you’d give it full marks, but apparently it’s intended to be serious. And because Zuck is surrounded by the reality-distortion field created by vast wealth, other apparently rational tech moguls are scrambling to pay homage to his fantasy. The other day, for example, Microsoft, hitherto a serious computer company, laid out nearly $70bn of shareholders’ money to buy computer gaming company Activision Blizzard. Various rationalisations have been proposed for this splurge. The logical one is that computer gaming is a huge industry in which Microsoft already has a significant presence. Owning Activision, which makes some of the most popular titles, including Call of Duty and Candy Crush Saga, would make it an even bigger player. QED.

But there is another, more intriguing interpretation, which is that Microsoft’s chief executive, Satya Nadella, has caught the metaverse bug. For one thing, metaverses are, by Stephenson’s definition, basically immersive virtual-reality environments and the games industry specialises in creating just such environments. For another, Nadella has been heard burbling about his desire to create an “enterprise metaverse”. At which prospect, fevered visions loom – of avatars of tech moguls in pinstripe suits and chinos stalking one another in virtual boardrooms, doing battle with lightsabers. And then one realises that such folk have no need of a parallel universe, meta or otherwise. They already live in one.

What I’ve been reading

Environmental alarm call
Can Science Fiction Wake Us Up to Our Climate Reality? is an unmissable New Yorker profile of writer Kim Stanley Robinson by Joshua Rothman.

Learning to love oneself
On Not Hating the Body is a truly extraordinary essay on body hatred in the journal Liberties by the philosopher Martha Nussbaum.

Mentioned in dispatches
Dan Wang’s letter from China is always a memorable annual event; his 2021 missive continues the tradition.