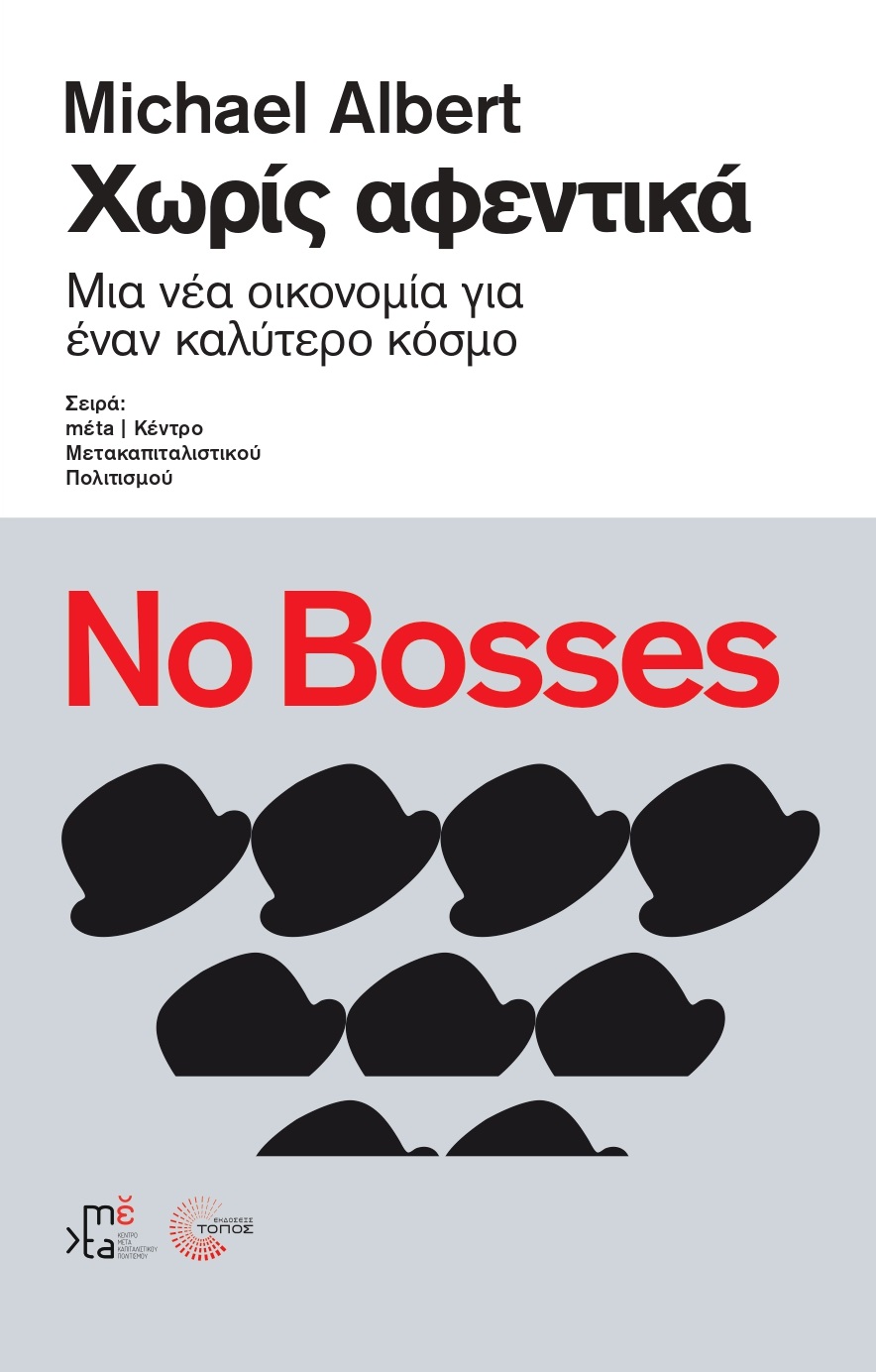 [Book in Greek] No Bosses: A New Economy for a Better World | Michael Albert

Life under capitalism. Rampant debilitating denial for the many next to vile enrichment of the few. Material deprivation, denial, and denigration. Dignity defiled. Michael Albert’s book No Bosses advocates for the conception and then organization of a new economy. The vision offered is called participatory economics. It elevates self-management, equity, solidarity, diversity, and sustainability. It eliminates elitist, arrogant, dismissive, authoritarian, exploitation, competition, and homogenization. No Bosses proposes a built and natural productive commons, self-management by all who work, income for how long, how hard, and the onerousness of conditions of socially valued work, jobs that give all economic actors comparable means and inclination to participate in decisions that affect them, and a process called participatory planning in which caring behavior and solidarity are the currency of collective and individual success.

A member of mέta’s Advisory Board, Michael Albert is a founder and current member of the staff of Z Magazine as well as staff of Z Magazine`s web system: ZCom. Albert`s radicalization occurred during the 1960s. His political involvements, starting then and continuing to the present, have ranged from local, regional, and national organizing projects and campaigns to co-founding South End Press, Z Magazine, the Z Media Institute, and ZNet, and to working on all these projects, writing for various publications and publishers, giving public talks, etc. Albert is the author of 21 books. Most recently these include: No Bosses: A New Economy for a Better World (Zero Books, 2021), Fanfare for the Future (ZBooks), Remembering Tomorrow (Seven Stories Press), Realizing Hope (Zed Press) and Parecon: Life After Capitalism (Verso). Many of Albert`s articles are stored in ZCom and can be accessed there along with hundreds of other Z Magazine and ZNet articles essays, interviews, etc.

I boundlessly celebrate the publication of a Greek translation of “No Bosses: A New Economy for a Better World” by Topos Books in collaboration with the wonderful Centre for Postcapitalist Civilisation, mέta. Greece, like so many other places, including my U.S., not only confronts a very dangerous economic, political, and ecological future, but also a potentially equitable, self managing, and green one. Moreover, Greece’s population, I think like people everywhere, is steadily realising as much. So “No Bosses” in Greek is timely. Like any book’s author, I of course want the ideas conveyed by “No Bosses” to reach widely, be critically assessed and refined, and be shared. But with a book presenting a postcapitalist vision, this desire is really the whole point. Emerging from past practice and seeking to aid future practice, a book like this has merit only insofar as it facilitates and promotes further thoughtful strategic activism today and into the future. That is what mέta stands for and so too the book “No Bosses”. I hope it proves useful in Greece, as I hope it proves useful wherever folks seek to move beyond capitalism.