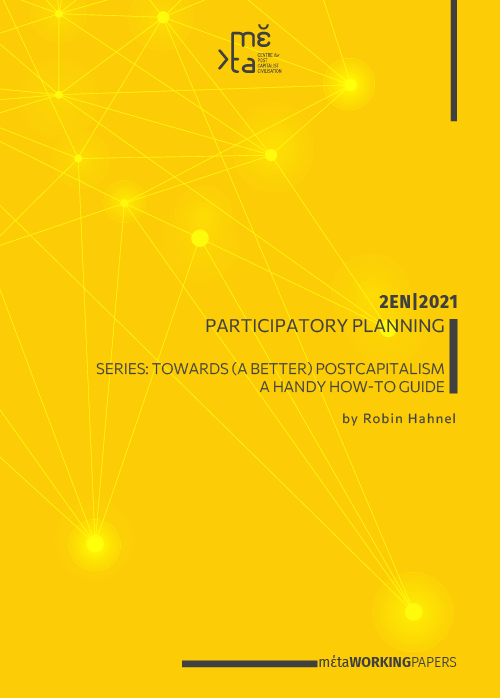 i.e., how could/would postcapitalist production be like (and who would own the means of production), what shape would the allocation of goods take (and which alternatives to the market economy may be explored), and what would be the main tenets of postcapitalist democracy.

Robin Hahnel is a radical economist and political activist. He is Professor Emeritus at American University in Washington, D.C. where he taught in the Economics Department from 1976 – 2008. He is currently a visiting professor in economics at Portland State University in Portland, Oregon, where he resides with his family. During the past fourteen years he taught as a Visiting Professor at Portland State University, Lewis and Clark College, and Willamette University in Oregon. His work in economic theory is informed by the work of Thorstein Veblen, John Maynard Keynes, Karl Polanyi, Pierro Straffa, Joan Robinson, and Amartya Sen among others. He is best known as co-creator, along with Michael Albert, of a radical alternative to capitalism known as participatory economics (or parecon for short). His more recent work is focused on economic justice and democracy, and the global financial and ecological crisis. Politically he considers himself a proud product of the New Left and is sympathetic to libertarian socialism. He has been active in many social movements and organizations over forty years, beginning with the Harvard and MIT SDS chapters and the Boston area anti-Vietnam war movement in the 1960s.

(Other additions to the “Towards (a Better) Postcapitalism: A Handy How-To Guide” series include Michael Albert’s paper on Postcapitalist Decision Making.)