Look Down or sleep tight! 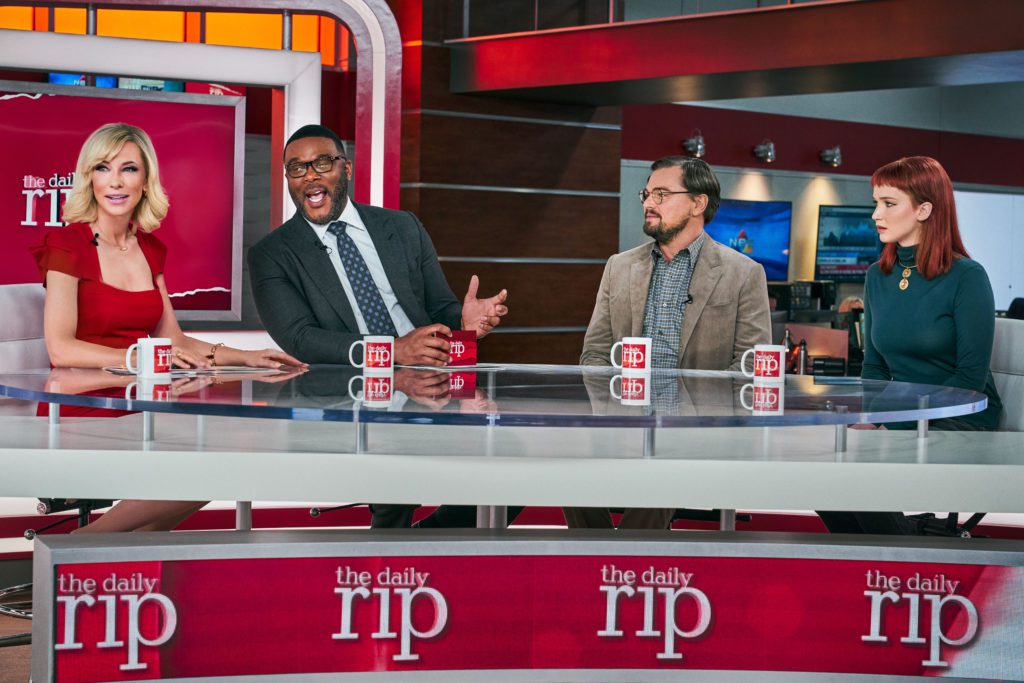 As I’ve heard from many people that I had to watch the movie Don’t Look Up, what finally convinced me to do so was to discover who its director and screenplay’s writer is: Adam McKay.

Oddly enough, the recommendations of this film were accompanied by very different interpretations and perspectives. Only after watching it that I was able to understand the reasons behind the euphoria.

I would claim that for one to understand the true representation of the fiction Don’t Look Up, one must go back to McKay’s previous movies The Big Short and VICE. Why? Because they reveal the key beyond the mere subjective interpretation of each viewer, who may end up projecting his or her worldview into this movie.

The “plurality” of possible interpretations is caused not by a flaw of the movie, but because it brilliantly unveils the totality of our social relations, the totality of capitalist power. Hence, as each individual, in his or her daily life, faces merely some isolated phenomena of capitalism, without having the theoretical awareness of how do they relate to additional phenomena, which only then could form a totality, the movie appears to confirm through the means of fiction what the individual already learned from the reality.

Nevertheless, my claim reads as follow, McKay has shown from both The Big Short and VICE to have learned that capitalist problems are not merely isolated phenomena, nor do they represent the corruption or malevolence of singular individuals, on the contrary, they are social imperatives that cannot be turned off while capitalist logic remains the principal, leading social logic in our societies.

This means, surplus capital, the profit of production by the means of the private control of the social property relations (and not simply by the exchange, trade, or also known as profit by alienation), namely the private property of the means of production, creates the immanent and imperative condition for a bipartisan ruling by the capitalist elites supported by the capitalist state and institutions.

For the organic intellectual of the hegemonic elite, the movie may appear as a parody or, alternatively, a caricature, however, its representation already shows not only the mistake of such view but also some mechanisms of why and how the intellectual becomes part of what he or she ought to criticise but ends up defending.

And although Don’t Look up is supposed to be a fiction, it is as a matter of fact more real than reality. While our reality, pushed through every day by the whole elite hegemonic apparatus, constantly hides the real, Don’t Look Up reveals many of the hidden elements of our everyday life, our narratives of (self-) deception, our seemingly-secular belief-system, in a word, our reality, which prevents us from understanding the real.

The capitalist elite does not tell to many of us directly to Look Down, this is the implicit message, this is the result it wants to achieve, thus the elite says Don’t Look Up. The essence of our capitalist society of the spectacle is to hide the essence, the movement that characterize our social relations, the real process of being; as a result, the spectacle is constantly shaped and reshaped by the negation of the being.

Instead, the irrelevant becomes relevant; the capitalist spectacle focuses, fosters, deifies, and pushes the appearance. Thus, it is not the being, nor even the having or possessing, but the appearing that in capitalism confers reality to the real. The real ceases to be real and appears product of the spectacle’s reality.

Even though Baudrillard thought to have superseded the spectacle Debord’s with his notion of the simulacra, the latter is an immanent moment of the former, they are two moments of the same totality.

Information, knowledge, writing, and communication tools do not carry in themselves an essence, they are neither negative or positive. Historically they have been used both to consolidate cultural practices as well as to manipulate by the means of propaganda.

However obvious and clear this is, the colossal amount of available information, coupled with the rhetoric of freedom of speech, of thinking, and of access to information, etc. – all blatant lies –, convey a narrative that our society would be impervious to and immunized against propaganda and deceitful information from power elites.

The grassroots of political movements beyond professional politics (the mediation of capitalist power) must take back the task for itself of the political education of the masses, of informing them about the real beyond the appearance of the reality. The lack of understanding of Don’t Look Up in a systemic fashion, from not only academics but also journalists, reveals the depth of the problem we find ourselves in as a society. The left movements must emancipate themselves from the grips of the power elites and start acting on behalf of humanity and the planet. The elites push not class struggle but class warfare, meanwhile the left-wing movements believe in the fantasy of governing for all within a society divided in classes

However, before grassroots movements can provide any actual unveiling of the power relations, they must learn how to connect theory to practical reality, because appearance has taken over not only the minds and dreams of the masses but theirs as well. As soon as names, such Lula (Brazil), Boric (Chile), Mujica (Uruguay), etc., come up, promising the illusion of a unified society, left-wing movements start celebrating victory with total disregard to both the historical practices of those candidates as well as the concrete class relations in the countries they claim allegedly to represent.

Insofar the left-wing movements, believing and focusing on the appearances, remain sedated, capitulated, sleeping tight, simply a controlled opposition of the elites, then the masses will continue to sail the winds blown by the capitalist class, having to accept the proponents of false options the system allows them to believe in as if they were real possibilities for change.

In other words, as George Carlin brilliantly said in regards to the power relations ruling the United States: “The owners of this country know the truth, it’s called the American Dream, because you have to be asleep to believe it”.