Anish Kapoor on vaginas, recovering from breakdown and his violent new work: ‘Freud would have a field day’ 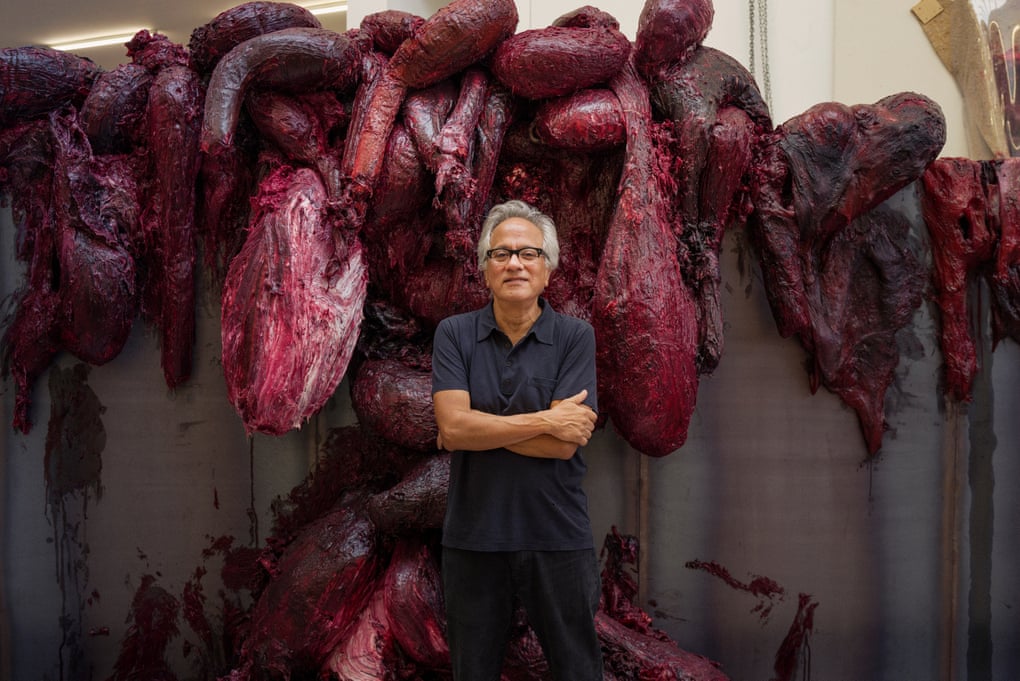 Thu 30 Sep 2021. Why has the artist painted scenes of bloodletting, decapitation and a woman with 10,000 breasts? He’s scared to talk about it – but he can explain his fascination with vaginas and the world’s blackest black.

At 67, Anish Kapoor, with a knighthood, a Turner prize and a retrospective due at the Venice Biennale next year, appears determined to strip away his own artistic skin. Like Marsyas – the satyr flayed alive by Apollo, whose gory fate Kapoor once commemorated in a 150m-long, 10-storey-high sculpture – the artist is exposing his innards. That’s the only way to describe his latest works. One of the world’s most renowned sculptors is about to go public as, well, a painter. Yet it is the content of the works he’s about to unveil that may disconcert. “They’re very, very violent,” he confesses. “And I just wonder what the hell that has to do with what’s in me. I can’t sit here and psychoanalyse them. I don’t know how to. But I recognise that it’s there.”

The works, about to go on display at Modern Art Oxford, are beautifully painted yet brutal: full of images of bloodletting, decapitation and disembowelling. Kapoor seems to have taught himself to paint the human figure in order to desecrate it. At his London studio, there are stacks of these blood-soaked canvases depicting huge wounded bits of bodies and purple organs spattered on the walls.

“Yikes,” he says. “I’m not doing it intellectually. I just wanted to make a many-breasted quasi-female figure and see what happened. Could I unwrap her pristine exterior and look at her problematic interior, full of blood and guts and breasts and bits and pieces, and all that? Fuck knows. Freud would have a field day.”

Kapoor isn’t exactly an inhibited conversationalist. We meet twice, at his gallery, then his studio. On the weekend in between, he gives a speech to Index on Censorship in which he warns against “self-censorship”. And the flow of images and ideas in our discussion is certainly a masterclass in how to not censor yourself. Throwing out provocations and theories, he tries to explain what he’s up to.

“I’m doing what I’ve always done, which is to look to some primal ritual act. If one takes that to its logical conclusion, the primal ritual act has to be murder or sacrifice. In Freud’s Moses and Monotheism he talks initially about Moses having not been a Jew but an Egyptian – which I quite like – but from there on, it’s all about the idea that Moses was murdered. Moses was sacrificed.”

In case anyone misses the point, the paintings are accompanied by sculptures of enigmatic doorways and stepped buildings like Aztec pyramids, over big metal trays flowing with great painterly globs of red matter. Human sacrifice has played a part in many cultures. For Kapoor, it is a part of what religion is: “Its purpose has to be to ask ridiculous questions like, ‘Where do I go after I die?’ Or, ‘Where was I before I was born?’ Public display of the victim, public sacrifice, somehow helps us, even though it’s completely counterintuitive. We think the energy of civilisation is in a different direction. But apparently not so.”

These are unusual ideas and impulses to put on public display. At the gallery of his London dealer, we stop in front of a triptych of three big canvases that depict what at first look like florid, sensual blooms. Then you notice a headless neck bursting with blood, and the flowers turn out to be exposed anatomies. What’s going on? “The Diana of Ephesus who has 10,000 breasts … she’s there. So I think what was in my mind was the sacrifice of Diana, the opening up, the revealing, of what’s inside her body. You’ll see that the only remaining bit, in a way, is her vagina. All the rest is opened up.”

The vagina has become quite a theme for Kapoor. There was a row in France over his Versailles sculpture, Dirty Corner, which was nicknamed ‘“the queen’s vagina”. So what’s with the vaginas? Kapoor answers, unexpectedly, in terms of Marxist anthropology. “There’s an anthropologist I’m really interested in who’s weird,” he says. “A man called Chris Knight who wrote a book called Blood Relations, in which he speculates that the first culture was made by women and that it came from menstruation. That women who lived together, especially in small groups, menstruated together, and that they used red ochre to cover their bodies so as to hide their menstruations. He speculates that the first acts of culture were to do with this act of solidarity.”

The earliest artistic material known is indeed red ochre, which was used at Blombos Cave in South Africa up to 80,000 years ago. It makes a strong red pigment – hand prints and animal images in red ochre survive in cave art. Kapoor can’t get enough of it either. “I have an obsession with red. My favourite colour of all, the one I use by the ton, is Alizirin crimson. It’s a very dark bloody Bordeaux wine red. What’s interesting about red is that it links to black so unbelievably easily. Red makes great darkness. And of course one might say red is fully a colour of the interior.”

So Kapoor’s paintings are not so far from his sculpture after all. Since the 1980s, he has used colour to release the cosmic and the inward – from early works, in which he scattered raw pigment on small objects, to Descent into Limbo, a 2.5m deep hole painted with a black so dark the drop seems infinite (and into which one gallerygoer fell). “Colour is deeply illusionistic,” he says. “Deep space is something I’m constantly in conversation with – the way colour affects deep space, in ways that are indescribable with words.”

In his studio, among the bloody canvases, is a black lozenge on a white background, encased in a glass tank. He asks me what I think it is. One thing I am sure of – it’s flat. Then he gets me to look from the side. It’s not flat at all: it bulges out into space, a solid diamond form. The optical illusion is mind-blowing. “So this is one of these new works made in the blackest material in the universe,” he says. “It’s in a case because the material is highly toxic and it’s incredibly fragile, especially to saliva, so you can’t talk in front of it. It’s a nano material. And what happens is the light enters and basically it’s trapped and doesn’t escape.”Advertisement

After my breakdown, my mother went to India, got some earth and put it under my bed – so I could dream myself well

The entire row is daft, for Kapoor’s actual black nano material is dangerous, difficult to use and has taken years to develop into artworks. He shows me 19 more of these freaky spatial illusions in an upper room of his studio. Next year they will be unveiled at the Venice Accademia show. They take a lifetime’s colour research to a sublime extreme. Is it a cliche to ask if this fascination with colour was influenced by his childhood in India? “I think some of my relationship to colour has to be cultural. This propensity for red has to have something of that. I think of Picasso and his relation to his Spanish roots. They were with him always – the dark mythological forces playing away”.

In fact, when I push him to explain how his gory canvases reflect his own psyche, as opposed to anthropological ideas, he comes out with a moving story about India, displacement and the healing power of ritual. “I grew up in India,” he says. “I was there until I was 17, 18. My mother was Jewish, so my brother and I then went to Israel. And I had the most awful, terrible nervous breakdown. I could hardly walk. I had an aunt who lived in Israel and my mother came to visit me. And my aunt, who had a kind of shamanistic predilection, said to my mother, ‘You must go back to India and you must bring some earth and you must put it under Anish’s bed.’ Sorry Jonathan, this sometimes makes me want to cry. But anyway, I’ll tell you it. And so my mother, bless her, went to India and got some earth and put it under my bed, and my aunt said further, ‘He will be able to dream himself well from this matter.’ Wow! You know it took me years to recognise the power of this thing. It gives me goosebumps. Sorry, but it does give me goosebumps.”

Kapoor is an artist who takes you to the edge. He can make you contemplate the biggest questions. His new paintings are not so much a departure as a key to everything he has ever done, ransacking religion and myth to ask why human beings have always been driven to ponder the mystery of being. “I’ve been in Buddhist practice for a long, long time,” he says. “Zen practice. It matters to me. I do really believe that we are religious beings. Where do I come from? Who am I? What am I? Where do I go? Those are questions that puzzle us all.”