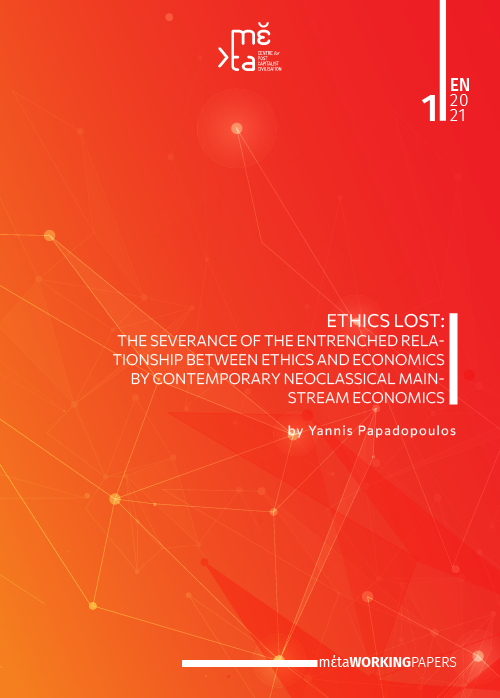 Ethics Lost: The severance of the entrenched relationship between ethics and economics by contemporary neoclassical mainstream economics

In this paper we examine the evolution of the relation between ethics and economics. Mainly after the financial crisis of 2008, many economists, scholars, and students felt the need to find answers that were not given by the dominant school of thought in economics. Some of these answers have been provided, since the birth of economics as an independent field, from ethics and moral philosophy. Nevertheless, since the mathematisation of economics and the departure from the field of political economy, which once held together economics, philosophy, history and political science, ethics and moral philosophy have lost their role in the economics’ discussions. Three are the main theories of morality: utilitarianism, rule-based ethics and virtue ethics. The neoclassical economic model has indeed chosen one of the three to justify itself, yet it has forgotten —deliberately or not— to involve the other two. Utilitarianism has been translated to a cost benefit analysis that fits the “homo economicus” and selfish portrait of humankind and while contemporary capitalism recognizes Adam Smith as its father it does not seem to recognize or remember not only the rest of the Scottish Enlightenment’s great minds, but also Smith’s Theory of Moral Sentiments. In conclusion, if ethics is to play a role in the formation of a postcapitalist economic theory and help it escape the hopeless quest for a Wertfreiheit, then the one-dimensional selection and interpretation of ethics and morality by economists cannot lead to justified conclusions about the decision-making process.

Υannis Papadopoulos was born in Athens in 1993 and studied European and International Relations at Panteion University in Athens. He received his Master’s degree in Political Economy from King’s College London. He is currently in the final year of his doctoral thesis entitled “The Ethics of Efficiency and the Efficiency of Ethics” at Panteion University, for which he has received a scholarship from the Hellenic Foundation for Research and Innovation (H.F.R.I).