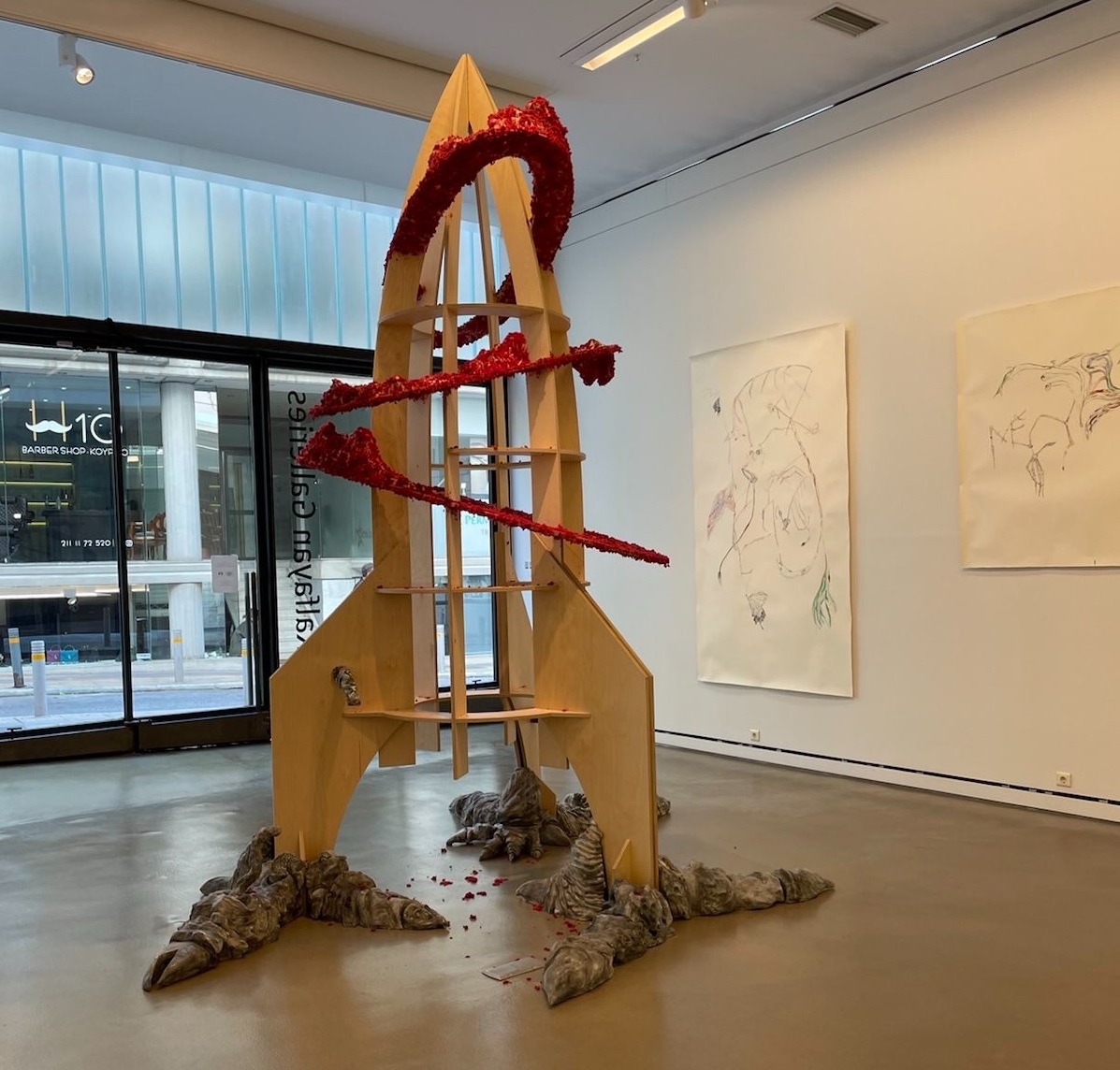 A day somewhere in the future. A day with a long, numerical title like those in sci-fi movies; names of days are no longer relevant. Time stretches, bends and breaks. The bones in our bodies follow the same pattern. Everything is a network, connected. If something breaks, everything else feels it. How did we get here? It’s hard to tell. The evidence is scattered, but at one point there was a flight. A flight out of this planet and a flight that charged through everything we have taken for granted on this planet; tearing down those barriers, watching them crumble and fall on the door like a pile of broken bones. During the crash everything collided together, and, in the debris, new connections were made. What before seemed impossible became a union, what before deemed unimaginable became a neuron. There was no more distinction between species, no more omnipotent humans, no more separation, just networked sentient beings. Emerged out of necessity, out of revolution, because no other option was left: a crash, long-time in the making. Scattered visions and objects of this new normal are arrested in space. Glimpses of vegetal and humanimal abundance from Earth – back when we called her a Mother – have fused with evidence of death and relics of what humans gured the apocalypse would look like. But these become visions and talismans of hope and promise. They reside in a future anterior continuum, one that always keeps slipping away from humankind. They offer premonitions from a past time, déjà vus of what is happening, scientific visions of what is coming, sorcery to interfere with the future, rituals and fantasy to cope with the anxiety of its arrival. Preparing to leave this planet is not an easy feat and will not always be an escape strategy reserved for the privileged and the few. Escaping is a strategy that has ecological potential. To escape is not to falter in the face of adversity, it is not done to leave destruction behind, it does not show lack of courage: escape is to be reclaimed as a revolutionary tactic of togetherness. Fantasy is escape, reimagining, together, with other species, our future on this planet, without ever leaving it, is escape: an escape from authoritarian regimes that insist on controlling not only the lifespans of the innite number of beings in our system, but also their imaginaries. If this is to be no more, then a very dierent image of our worlds and their futures emerges. A rocket made of techno-biomatter, visualisations of curious life specimens, a chair with the ability to navigate our present and future imaginary, an armour to dress us with what we have already dreamt, velvet dust, and a logo for a singular mission that may become a symbol of resistance for the masses. What happens when deep ecology* becomes an ecology of the abyss, of the universe, of the infinite? What is it that shifts when a union between the infinitesimal and the majestic, the terrestrial and the celestial, the corporeal and the fantastical, the earthbound and the ethereal, the defined and the imagined, the human and the more-than-human, becomes an equation? If linear time travel and everyday life processes fail, then an orbital way of being and relating can perhaps show us the way to reimagine our entangled lives and our -hopefully- entangled futures – however they might look like. Transformation is to be mutual. End of message. Mission launched. Estimated time of arrival unknown. In Orbit.

*Deep ecology is an environmental philosophy and social movement based in the belief that humans must radically change their relationship to nature from one that values nature solely for its usefulness to human beings to one that recognizes that nature has an inherent value.

MARO MICHALAKAKOS was born in Athens in 1967. She studied painting in France (Ecole Nationale Supérieure d’Arts Plastiques de Cergy-Pontoise, 1987-1993) and Germany (Hochschule für Bildende Kunst, Braunschweig, 1988-1989). In 2006 she was shortlisted for the Painting Award of Castelon County in Valencia, Spain. She has presented her work in numerous exhibitions in Greece and abroad. Recent shows include: ‘Mr. Robinson Crusoe stayed home. Adventures of design in time of crisis’, Benaki Museum, Athens (2021); ‘Weaving the future II’, Katsigra Museum, Larissa (2021); Artwork commission by Hermès for the Athens store (2021); ‘La chasse’, Embassy of France, Athens (2020). Her works are part of private and public collections, such as the Fonds Nationales d’Art Contemporain in France, Istanbul Modern and others. She has also created set-installations for the theatre, in collaboration with directors, theatre companies and festivals, including the National Theatre of Greece, the Athens and Epidaurus Festival and Onassis Stegi among others. Enigmatic and multifaceted, the work of Maro Michalakakos is imbued with the softness and ambiguity of dreams. In her sculptural installations, painting, drawings and reliefs on velvet, the artist includes social and cultural references, and often draws from personal and family memories. In some of her works she introduces birds and the natural kingdom, often as a way to touch upon universal themes such as power, oppression, authority and the interconnected concepts of life and death.

KOSTAS STASINOPOULOS is a curator and art historian working at the intersection of art, ecology and identity. He works as a curator at Serpentine, London, focusing on live and interdisciplinary programmes, Back to Earth and General Ecology. He served as Associate Curator at The Stavros Niarchos Foundation Cultural Center and has collaborated with the Whitechapel Gallery, White Cube, Frieze and the Athens Biennale. Kostas received his PhD in History of Art from University of York (2016) funded by the Arts and Humanities Research Council, the Onassis Foundation and NEON. He holds an MA in History of Art from the Courtauld Institute of Art (2011) and a BSc in Biochemistry from Imperial College London (2004). Together with Hans Ulrich Obrist, Artistic Director, Serpentine, he is the co-editor of 140 Artists’ Ideas for Planet Earth (Penguin, 2021).