Michael Albert: ‘The hard part will be having our considerable resistance grow into truly massive resistance’ 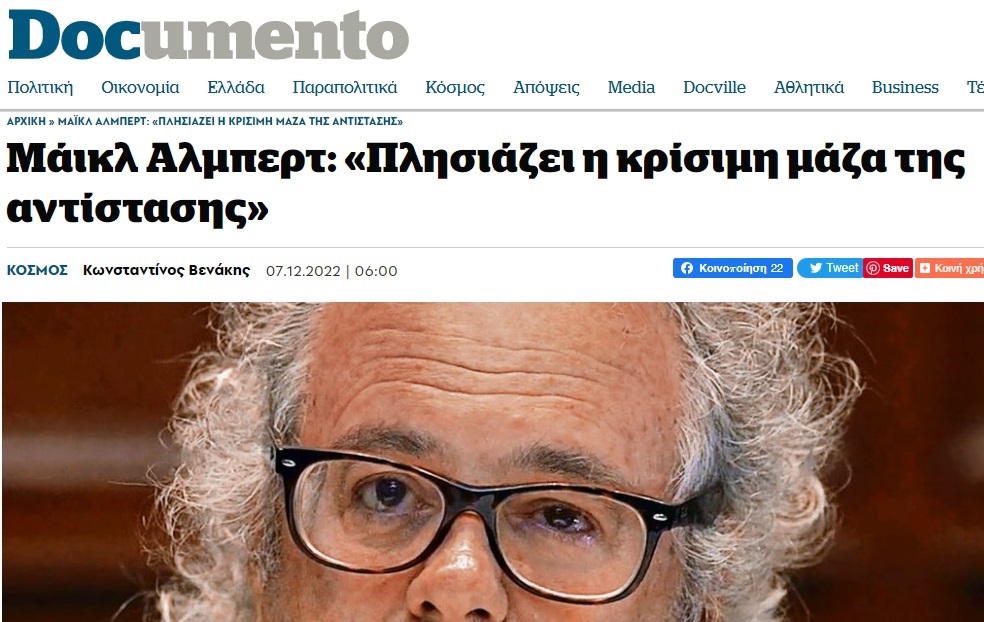 On the occasion of his new book NO BOSSES and the presentation of its Greek translation on Saturday 10 December at Red n’ Noir in Athens (6pm), the American author talks to Documento news and sends his own message to Greek readers.

It seems to us, from the other side of the Atlantic, that the United States find themselves in a profound state of discord — politically and socially alike. And the Democratic party isn’t quite in its most leftist stage in history, in spite of previous hopes with the rise of Bernie Sanders. Is this an opportune time for movements in the US to claim a different future?

Well, yes, it is arguably the worst of times. High water is rising, hard rain is falling, lies are multiplying. But it is also arguably the best of times. Workers, women, and youth distrust and reject the old. They resist. Slowly, people even seek new. So I think it is an excellent time to foresee, advocate, and seek a different future because without doing so cynicism will smother activism and activism will lack direction. But, truth be told, in those respects these times are quite like other times. What is different now is the stakes. Now the stakes are not only liberation but also survival.

What about Europe, or the EU to be exact? It seems to be locked up in a largely bureaucratic procedure, rather than a properly speaking political one. How should the peoples of Europe take up the struggle, in your view?

I think that the answer to how people should take up struggle is broadly the same everywhere. Listen for and address the ecological, political, economic, and social needs of today. Link suffering dissident constituencies with one another. Listen, explain, organize, and demand in ways conceived to not only win gains now, but to also elicit desire for and prepare to win further gains later, right up to winning a different, worthy, viable, future.

In other words, don’t win an immediate gain and go home. Win immediate gains, then fight on for more. But that broad answer, while general enough to be relevant everywhere, when fleshed out in actual worldly practice becomes different everywhere. The needs people feel today and the obstacles to winning gains to meet those needs that restrict us today differ from place to place. The precise words and tactics we need to use to win gains today, closely depend on local relations. They thus also differ from place to place,

Greece finds herself after a decade of harsh austerity, on top of which the pandemic and the Ukraine war ensued, as well as a major government-sponsored surveillance programme. In your view, is there any end in sight?

I suppose what one sees down the road depends on ones temperament and understanding, as well as on visible evidence. Buzzards or fundamental change? For me, the answer is yes, I certainly see a very real possibility of massively growing resistance and, in time, fundamental change. In some ways, I even suspect considerable resistance will be almost automatic. After all, otherwise, we are in a slip slide to hell. The hard part will be having our considerable resistance grow into truly massive resistance. The hard part will be to have that massive resistance lead where we want to go. The hard part will be to have that forward oriented resistance be resilient, flexible, and committed enough to successfully stay the course for as long as it takes. but this is not optional. Not only does having a different future that we seek require such informed, visionary, committed continuity, but having any future at all requires it.

People in Greece are not that much acquainted with Z Network, a hub of radical politics in the US. Could you introduce them to it?

The site ZNet is now at znetwork.org. It combines articles, interviews, debates, video, audio, and much more to hopefully inspire and provide tools needed for winning social change all the way to a different future. I would say as its distinguishing characteristic it tries to emphasize vision and strategy equally for economy, polity, kinship, culture/community, ecology, and international relations. It calls the future that it seeks, participatory society.

Your 2022 book, NO BOSSES, has just been published in Greek and will be launched next week in Athens. Any message to Greek readers of the book?

Well, I very much hope you find the No Bosses vision, called participatory economics, inspiring and useful for Greek readers. Participatory economics centers on proposals for a communal approach to natural and built productive assets; for self managed economic decision making by workers and consumers councils; for a classless division of labor and organization of work; for equitable distribution of income, responsibilities, and opportunities for all; and for participatory, cooperative allocation that supports all that and properly accounts for the personal, collective, and environmental consequences of production and consumption.

It claims the five core institutions it proposes will provide the defining core of a classless and free, worthy and viable replacement for dignity robbing, soul stealing, suicidal capitalism. Will they? Well, that is for you to judge and I would love to hear your criticisms, refinements, questions, and really whatever you would like clarified or you think might be useful for participatory economy’s advocates to hear to improve our efforts to advocate the participatory economic vision the book proposes. I am at [email protected]

Write to me. I will write you back.